Why doesn’t React come with dependency injection? Short answer: Because it doesn’t need it and also because it is not its responsibility.

But how do you isolate your components during testing then? How do you achieve inversion of control for dependencies when you do not have a dependency injection container?

Let’s have a look…

You are watching the third video of a series about doing TDD when developing a React webapp. I made this series and the underlying app because I teach React trainings and also TDD trainings, and I needed some new examples for that.

The videos themselves will not give you everything you need to implement your own webapp from scratch, but only show you some interesting aspects of doing TDD. If you want to know more, look at the code and commit history of the webapp on GitHub, which I’ll link in the description.

The webapp I am talking about is a simple “kitchen timer”. It only contains a few components, but I still want to isolate them from their business logic in my tests.

The “App” component renders a “Timer”, which is shown as “Anonymous” here in the DevTools. We’ll see in a minute, why. The Timer renders a configuration panel and the graphics itself, which is an SVG containing a “Background”, the red “Slice” and a “Foreground”. 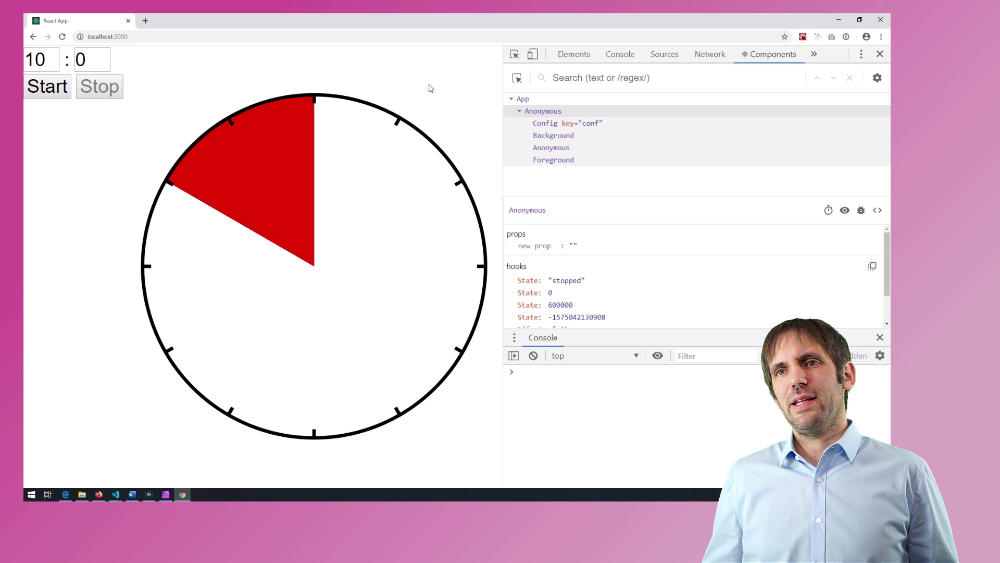 I tried two variants for injecting the dependencies:

I do not want to pass in the functions every time in my production code, so I assign default values to some of the props - default values for the dependencies I want to inject.

In the case of the Foreground component, the dependency is the function circleSegment and the default implementation is segmentTo - a function that contains the production code. Foreground needs that to calculate where to draw the small lines, given a percentage point on the circle.

In the production code, I can use the component directly, only passing in the “real” props - i.e. the props that are not injected dependencies. Those will come from the default values. In this case, the foreground component only has dependencies, no other props.

In my tests, I can pass in stubbed functions using the extra props, end then test whether those functions were called. 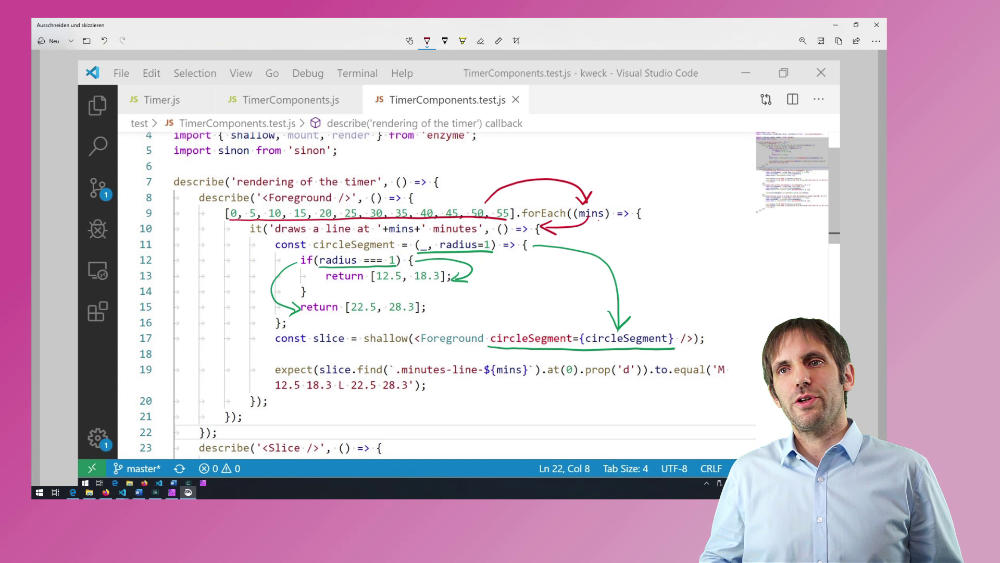 In the test code, I stub circleSegment to only return two canned values - one when radius is “1” and a different value otherwise: I want to test the behavior of the caller at those two points. The test itself is a parameterized test that is run with different values of the parameter mins.

The second variant I tried was to create the component using a function, and that function gets the dependencies - again with default values.

I create the “production” Slice with the function createSlice, which again gets a dependency called circleSegment. The default implementation is again segmentTo. The Slice also draws something at different percentage points of the circle, in this case, the red pie slice. 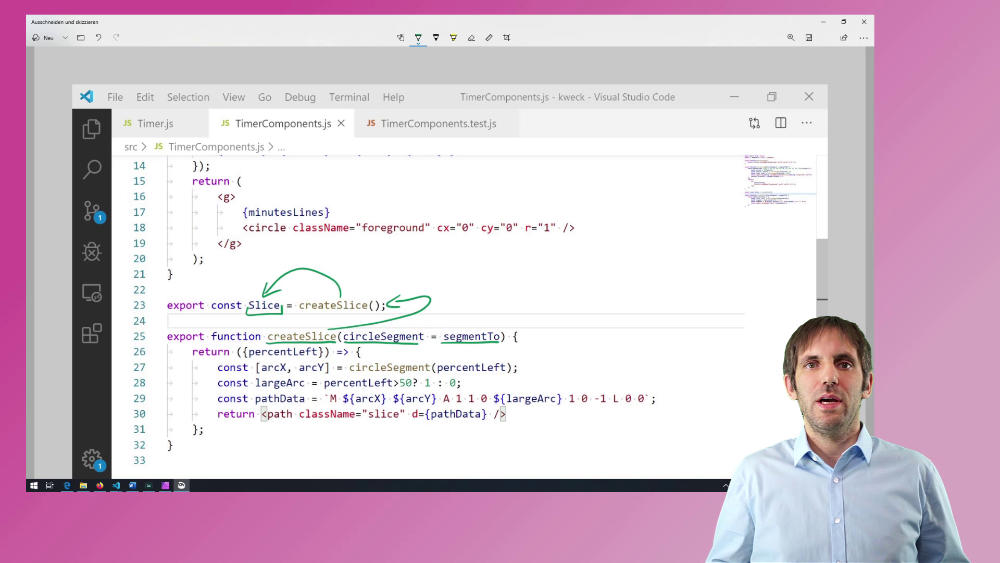 This function creates a react component - in this case, only a render function - that has a single “prop”. So, both the production code and the test code use the component with only this parameter: 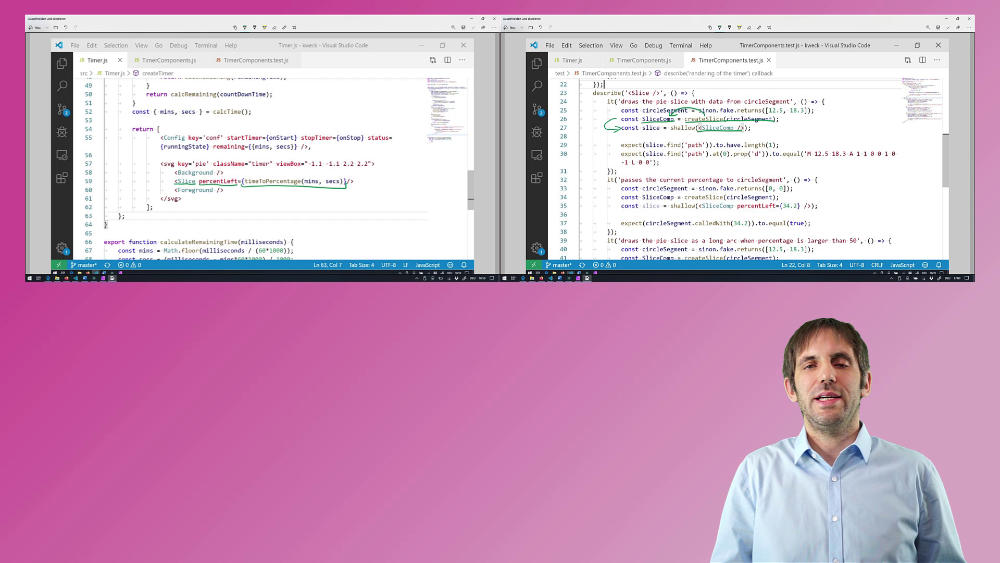 Here we also see why the component is shown as “Anonymous” in the React DevTools. It is an anonymous function. You can fix that by giving the returned function a name, but that makes the createSlice function slightly more complicated:

The test code creates the component differently, passing in a stubbed (or in this case, faked) implementation of circleSegment. 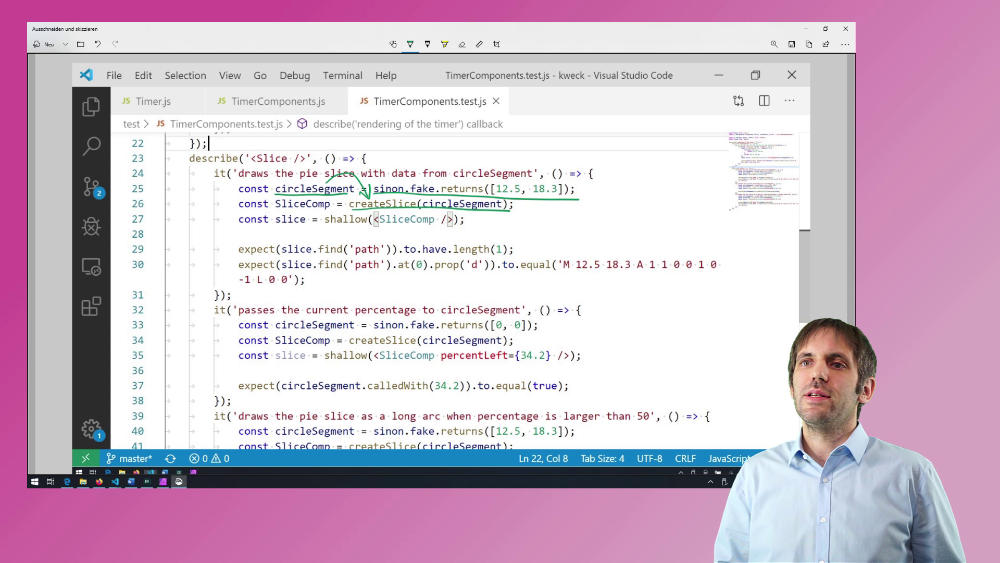 You will not pass those props in your production code, but you can do so during testing. It’s easier to implement, but somehow it seems to be a little bit less “clean” to me.

The other option is to have a function that creates the component. That’s a little bit more code to write, but it separates the responsibilities better: The component is only responsible for rendering and maybe state management, the create function is responsible for the dependencies.

One could even combine the two approaches: Have a create function that gets the dependencies and passes them as “props” to the component, like Redux’ connect does.

Subscribe to this youtube channel, so you do not miss the next video, where I will show you how I test-drive some of the business code: A well-known formula that I still want to TDD to get all edge cases right. Also follow me on Twitter, I am @dtanzer there. And check out our training offers at devteams.at/services/training where we provide React and TDD trainings.