I have been at the DevOne Conference Linz this year, and… It’s been a blast.

I have already been at some very well organized conferences, but this one was the best so far. The program, the food, the organization: Everything was very close to perfect.

Here’s what happened, my impressions and some opinions…

The conference was in an old factory building that has been re-purposed and now contains offices, shops and event locations. The welcome desk was at the old reception of the factory, then you had to walk past a bike shop to the conference. 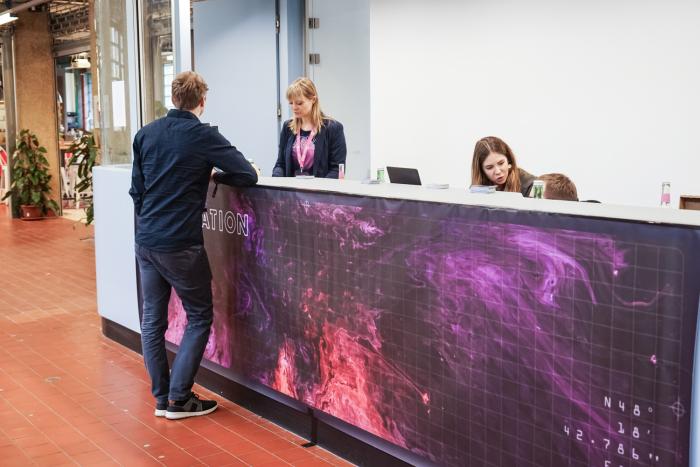 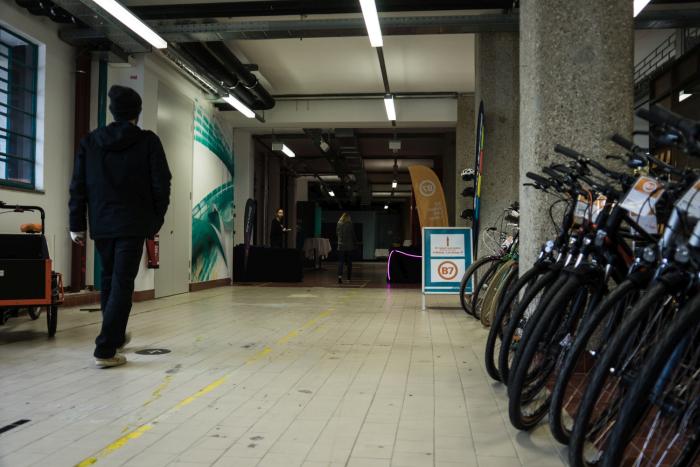 They used Tito for ticketing and registration, which worked quite well. But they had the same “problem” that we at SoCraTes AT have with Eventbrite: The organizer app takes a loooong time until it is started up and ready to scan. It was not a problem for me, as an attendee - but as an organizer, this always bugs me because it wastes time.

There were over 600 people, which is a lot for our city and also a lot for a single track conference. 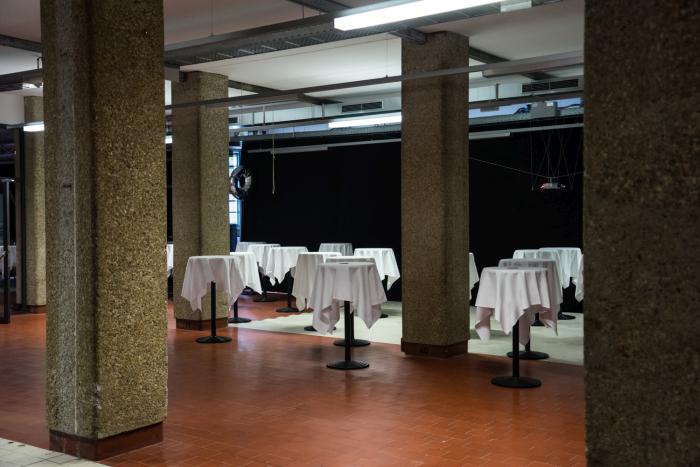 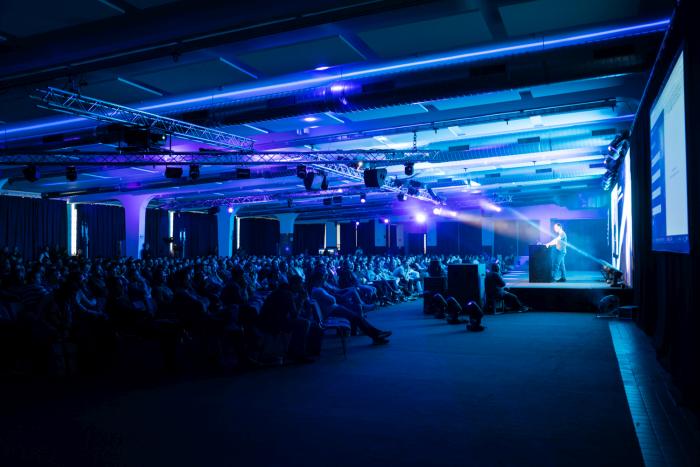 The organizers told me that they actually wanted to have two tracks, but the second large room at the venue was not available, so they had to switch to single-track. And this worked really well - I think it worked better than two tracks would have.

Since the conference was single-track and there were 11 talks, the program was packed. There were two half-hour talks, then a short break, and this rhythm would repeat throughout the day. It was really fast - and I think that was good.

30 minutes is enough for a speaker to tease a topic and convey some details. Yes, it is not enough to get into a topic deeply. But sometimes, as an attendee, you just want an overview of what’s out there. DevOne was about that overview. 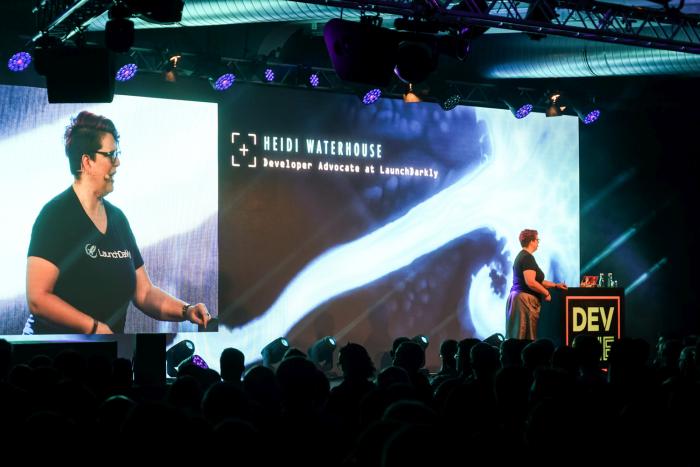 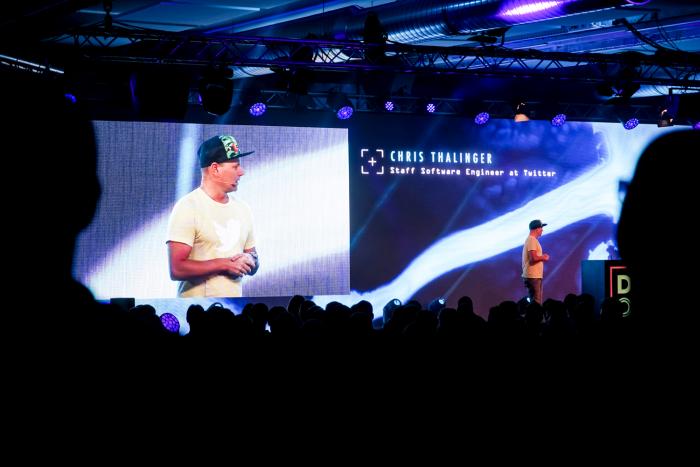 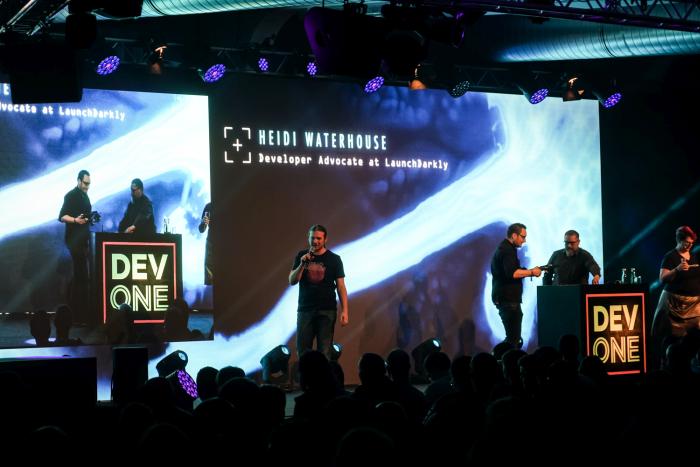 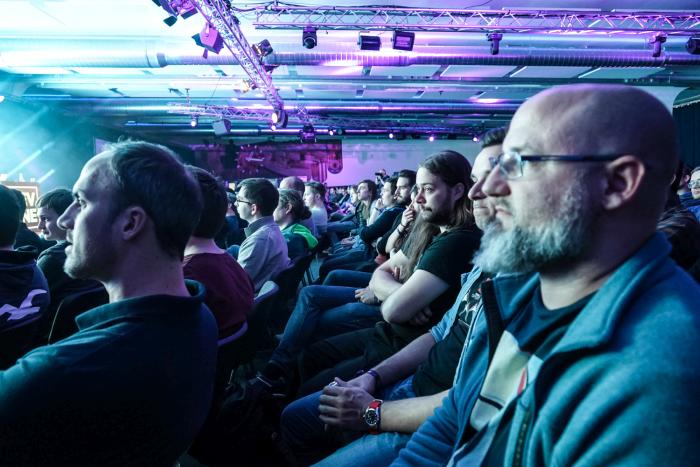 The program was mostly curated. DevOne had a public call for papers, but only two of the 11 speakers were selected through it. Everyone else was invited.

Doing that allowed them to have a very diverse set of speakers and topics and to have some really polished talks. On the other hand, the program was almost too polished, at least for me.

But I did not see a single bad talk. All talks were either good or excellent. That’s the big advantage of a curated conference: They did not take any risks.

And the “chalk talks” somewhat solved to too-polished problem.

The idea: They put up some wooden walls in the break area, put some lounge furniture inside and had discussions there. Those chalk talks were in parallel to the main track. Someone would give a very short lightning talk and then discuss the topic with the audience. 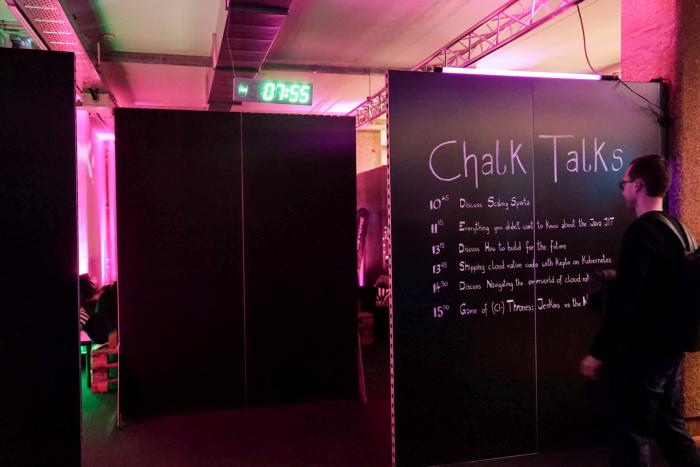 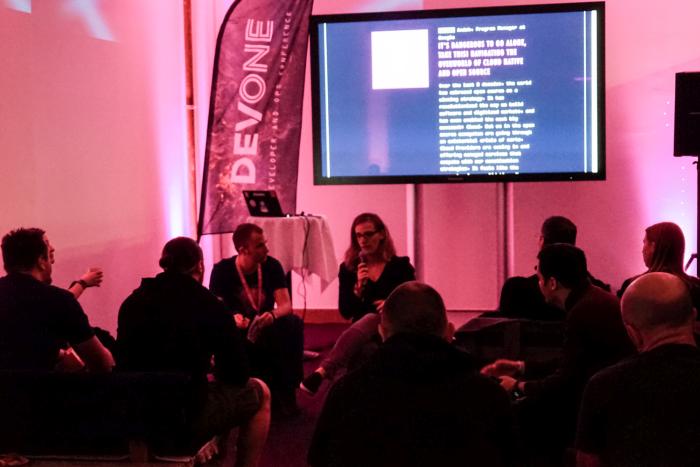 Theoritically, everyone who had a ticket could have proposed a chalk talk. But many of the actual chalk talks were speakers from the main track discussing their topic again. And that was good, since there was no time for questions in the main track anyway.

I only attended one chalk talk, but this one was very interesting.

There was water, soft drinks and snacks everywhere. There were even fridges with water and soft drinks at the main stage, in the back of the hall. I loved that - You must have enough water at a conference. To me, that’s even slightly more important than coffee…

…but only slightly. And they had coffee. There were many, many machines for self service, and the coffee tasted great. And they also had a barista where you could order specialities. 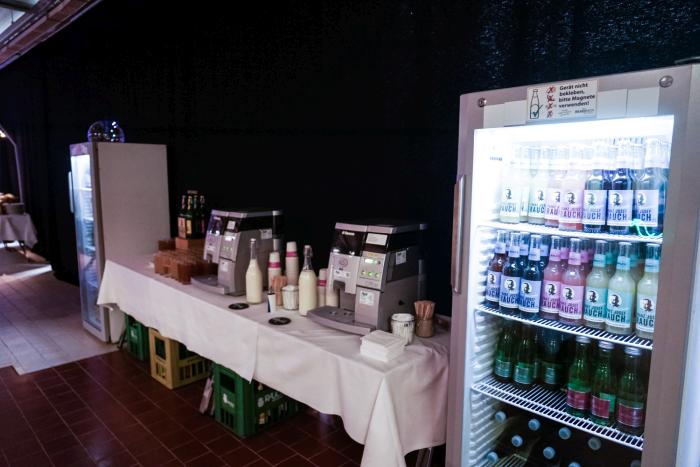 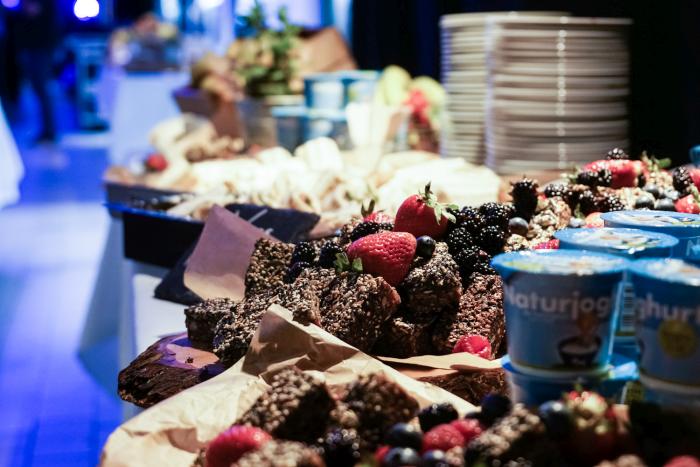 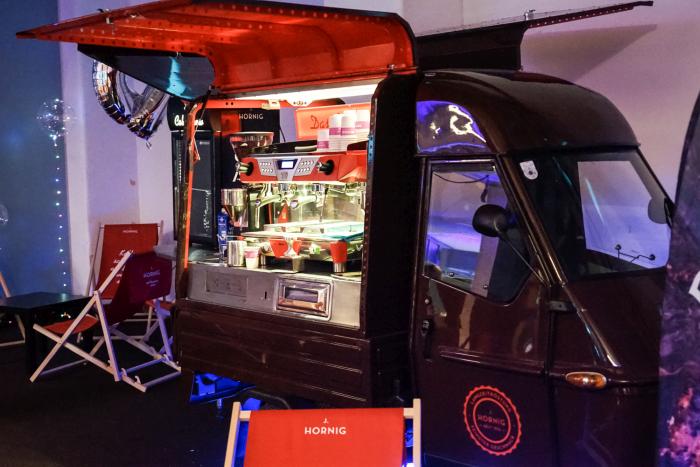 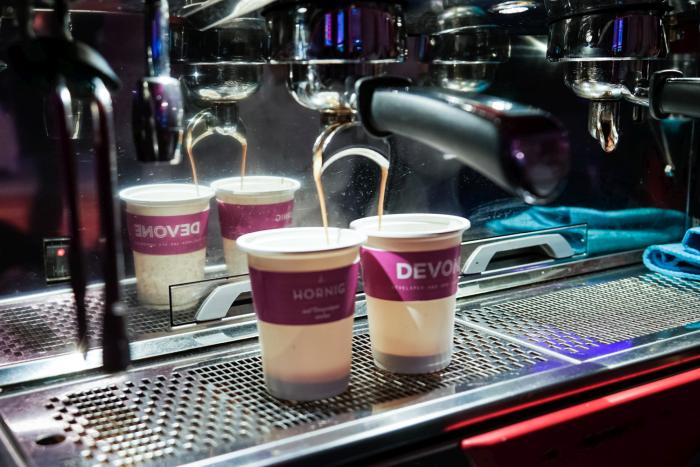 They even took care to use a color for their coffee cups that fits very nicely with the color scheme of my blog - how nice of them ;)

For lunch, there were different food options, also a vegan one. Which is really important for me, even though I am not a vegan or vegetarian. To be inclusive to everyone, you not only need things like step-free access or a diverse speaker lineup or …, you also need enough, good vegan food, info about allergenes, … 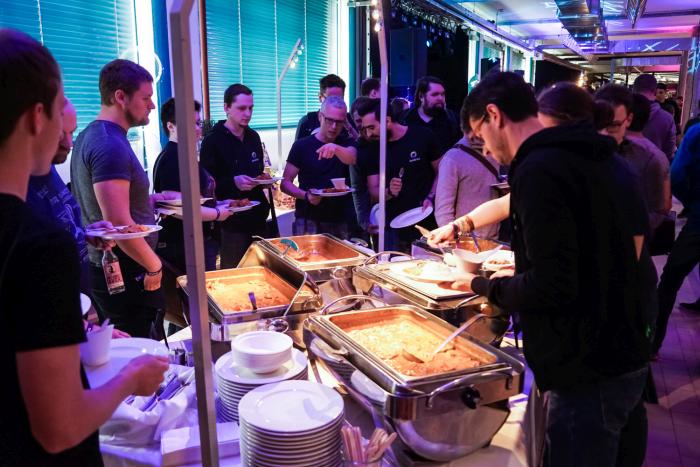 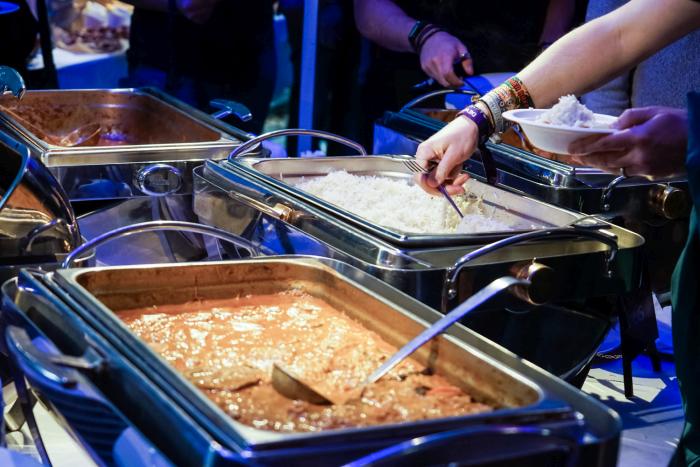 And DevOne had all of that.

Popcorn. They even had a popcorn stand. 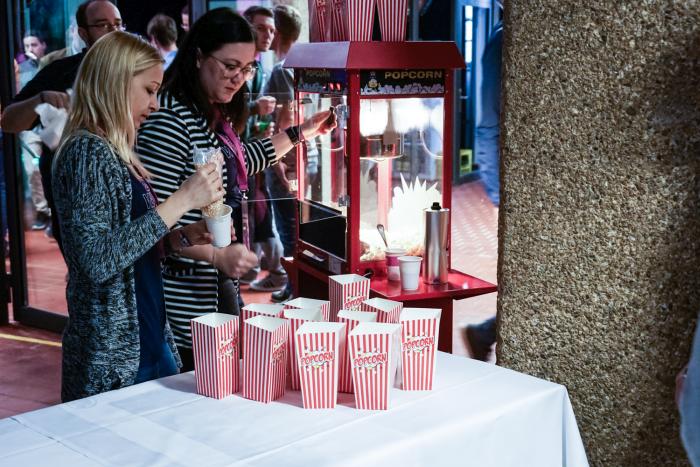 The theme of the conference was “Space” and everything was indeed very “spacey”. Dim neon lights, music, … 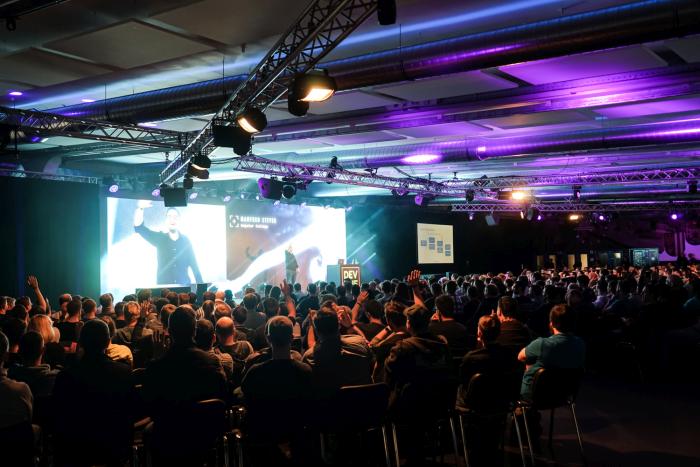 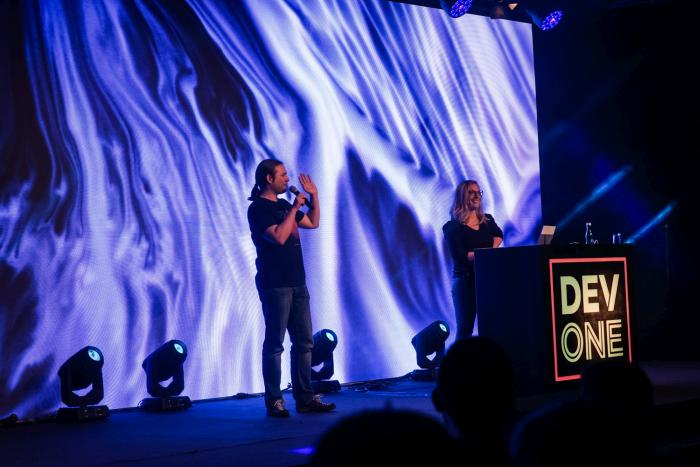 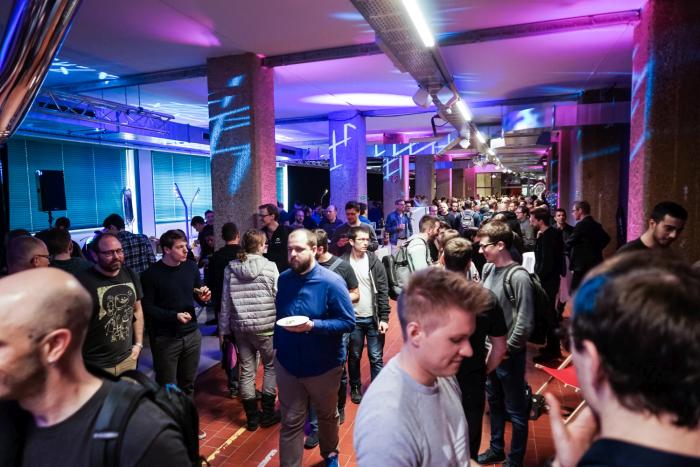 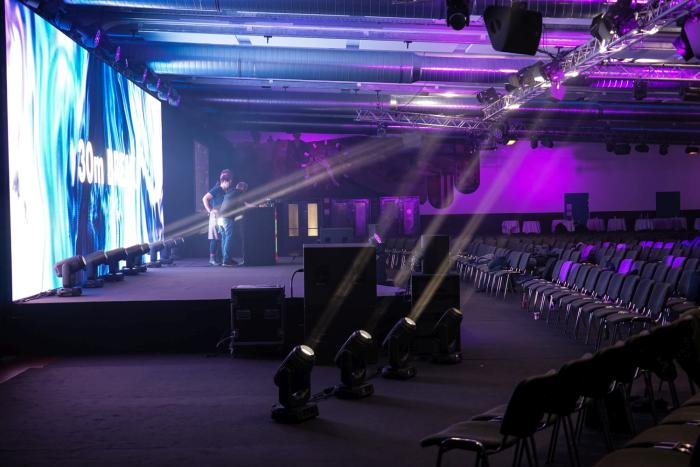 DevOne was not a conference to teach you in-depth knowlege about something. For that, the talks were too short.

But it was a conference where a diverse set of speakers gave a great overview about a diverse set of topics. And there was also a little bit of in-depth knowledge, and room for discussion during the chalk talks. And the talks on the main stage were a great show.

If there is one thing I would critizise - and this is only a tiny criticism - I would have liked a differen mix of curated talks and talks from the call for papers. I don’t know if the program would have been better. Maybe not; but it does not seem fair to me to have a CfP and then select 80% of the program not from the talks proposed via the CfP.

Anyway, I am glad I attended DevOne. Hope to see you there, next year.